He had been born in Chicago in 1918 but grew up in Poland, where his parents took him when he was 2 years old.

During the war, he was wounded by a German bomb and was held as a prisoner of war by the Germans for seven months. When he was liberated by American troops in Bavaria, he weighed only 92 pounds. It was 1947 before he made it back to Chicago.

Mr. Nowak died Saturday in Resurrection Hospital after a brief illness. He was 86.

He grew up in Warsaw, graduating from a technical school as a junior architect in 1938. He had been working in that capacity for eight months when the Germans invaded Poland and he was suddenly jobless.

“I joined the Polish underground after Pearl Harbor,” he recently told an old friend and U.S. Army buddy, former Sun-Times reporter Bob Herguth. “The Germans were looking to pick up Americans. I got a fake I.D. but kept my old Polish I.D. for foreigners. I was free until the Warsaw uprising in 1944. Just before the uprising, I went to an underground officers’ candidate school and graduated. I was in Warsaw till we surrendered.”

Sometime after he returned to Chicago following the war, he joined the U.S. Army, and was a staff sergeant when the Korean conflict began. He knew Polish, Russian and German and served as a translator in Japan with an Army psychological warfare unit, the First Radio Broadcasting & Leaflet Group. He was discharged and returned to Chicago in 1952.

Back in Chicago, he began a long career as a commercial artist.

He was visiting family in Poland in 1958 when he first met the woman he would marry, Teresa Przybyl, a Warsaw University graduate and geography major. After their marriage, they settled on the Northwest Side.

Mr. Nowak is survived by his wife; a son, Robert J. Nowak Jr., who is webmaster for the city of Houston, and four sisters in Warsaw — Maria, Alina, Stacha and Janka. Visitation is from 3 to 9 p.m. today at Cumberland Chapels, 8300 W. Lawrence. Services will be held at 10 a.m. Friday at St. Eugene Church, Foster and Canfield, in Harwood Heights, with burial at St. Adalbert Cemetery in Niles.

My mom was born in Lodz, Poland and met my dad in 1958. In the pre-match dot com era, my dad’s sisters wrote him and wanted to set him up on a blind date.

In September 1958, my dad traveled to Poland to meet my mom. They hit it off so well that he returned to Poland over Christmas that year to marry her. Both the Polish judge who married them and the Polish Cold War government didn’t take kindly to one of its citizens daring to marry an American.

My mom was not allowed to leave Poland, my dad returned alone to the Chicago suburb of Aurora, and sometime in 1959 my mom was briefly imprisoned by the Polish government. In my dad’s sharing of efforts to bring my mom to America, it turned out the Executive Assistant to my dad’s boss had a close friend who worked for a United States Senator.

During the year 1959, the Senator worked on behalf of my dad to reunite the newlyweds in Chicago. It took thirteen months. My mom came to America in January 1960.

Thank you to Massachusetts Senator John F. Kennedy for his work in bringing my mom to America! 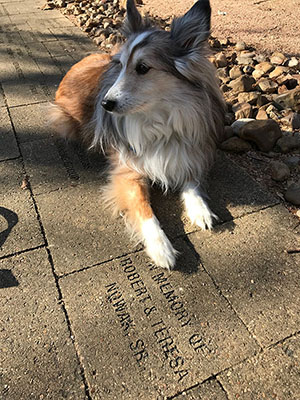 Polo guarding the memorial paver of my
parents at Memorial Park on January 13, 2019